An April decree bans importing imitations of traditional Egyptian handicrafts, including Ramadan lanterns. But is it enough to revive local handicraft businesses? 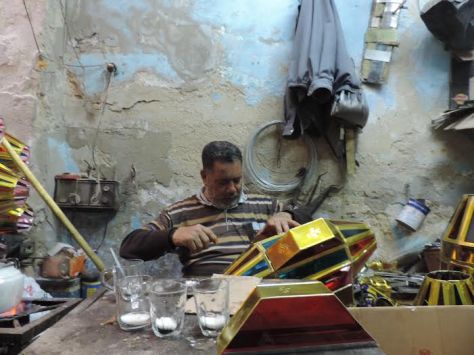 Islamic Cairo’s Khan El Khalili market is crammed with shoppers buying the goods they need for the Islamic fasting month of Ramadan. From its entrance on Azhar Street to its smallest alley, the neighbourhood is brimming with people, mostly locals, examining the products displayed in shops and on the side of the street.

As Ramadan approaches, the season’s colourful lanterns have just made a comeback around the market, starting from the tiny LE 5 lanterns to the bigger ones selling for hundreds of Egyptian pounds.

Known to be the hallmark of unique Egyptian products, Khan El Khalili and its surrounding streets have long bustled with shoppers from all over Egypt and the rest of the world. With its handmade copper plates, cushions, clothes, alabaster, jewelry, lanterns and even chandeliers, Khan El Khalili caters to all different tastes.

But, while the products cramming the market have remained the same for years, their origin has recently changed.

“People used to come from all over to buy the finest goods made by Egyptians, but then the cheap [imported] products took over the market,” says Hassan Mohamed, the owner of a small workshop in El Darb El Ahmar that makes engraved copper plates.

Chinese products started appearing in the market 10 to 12 years ago, says Amr Abdallah from Awlad Ezzat (Ezzat’s Sons), one of the big lantern shops on Al Azhar Street.

When the Chinese Ramadan lanterns became popular, Abdallah himself started importing them, he says.

But five or seven years ago, he changed his mind.

“I decided that it was time to stop buying imported lanterns and to support local business,” he says.

Amid concerns about foreign imports putting local craftsmen out of busines, Egyptian Minister of Trade and Industry Moneer Fakhry Abdel Nour in April announced an import ban on all imitations of Egypt’s traditional handicrafts, as a move to protect Egyptian identity and intellectual property rights.

The ban comes as an application of Article 20 of the 1994 international General Agreement on Tariffs and Trade (GATT) which gives any country the right to take the necessary measures to protect its “national treasures of artistic, historic or archaeological value.”

“It’s our right to protect our intellectual property and our identity and to take the necessary measures to do so, and all the countries do the same,” says Yasser Gaber Shaker, the Ministry of Trade and Industry’s spokesperson.

The ban includes Ramadan lanterns and Pharaonic-themed souvenirs such as papyrus.

But it remains unclear to what extent the ban will help to revive local handicraft production and sales.

While the ministry says the decree has already been implemented, some vendors claim that they have not yet seen a clear document detailing its terms. Most salesmen have already placed their orders for the season, they add.

Ministry spokesperson Shaker however claims that importers have spread a rumour that the ban has been postponed so that they can continue to sell their imported products.

Preserving crafts from the past

Not far away from Khan El Khalili and Al Azhar, Taht El-Raba’a, the production house behind many of the market’s lantern shops, is all geared up for Ramadan.

Unlike the other shop owners, Abdel Aziz Hashim hangs only the old-fashioned tinted glass lanterns outside his shop.

“For me, these are the only lanterns I know,” he explains. “Everything else they added or brought in from China has nothing to do with Ramadan.”

But over the last decade, plastic lanterns from China have flooded the Egypt market.

“Try asking kids who are born in the past 10 years about the traditional lanterns,” echoes Salama Hanafy, whose family has run a lantern making business from a tiny room in the neighbourhood for over 50 years. “They will know nothing about them.”

Although both Hashim and Hanafy welcome the new ban, they say that its implementation will be difficult.

Importers might already have enough imported goods in storage for the next year or even two, says Hashim.

And traditional lanterns will remain more expensive due to a rise in the cost of the materials needed to make them, says Hanafy: “We used to buy the glass for the lanterns for LE0.60 a kilo, but now it’s LE 3, which will definitely increase the cost of a lantern.”

But Hisham Raslan, another Khan El Khalili shop owner, relates the recent shift to Chinese products to a decline in the quality and creativity of local work.

“One of the reasons we have always depended on local handicrafts is for their quality, but when this started deteriorating and the Chinese manufacturers started to coming up with ideas for new products, we started to depend heavily on Chinese products,” he says.

Raslan, who is against the ban on imports, says that the products imported from China are different to those produced locally.

For example, Chinese manufacturers have innovated with pens covered with images of Pharoahs, Pyramids and Ancient Egyptian statues, he says.

The new decree is a positive step in the right direction, but more efforts are needed to revive local handicraft industries, says anthropologist Nawal El Messiri, who has worked on reviving local traditional craft industries for years at the Egyptian Folk Traditions Society.

The government and concerned organisations should raise awareness among manufacturers on the importance of quality for business growth, she says.

“When manufacturers understand that people will stop buying their lanterns if they continue to make them with sharp edges or in poor quality, they automatically put more effort into what they make,” says El Messiri.

When tinsel embroidery from Upper Egypt was in danger of disappearing, her organisation helped to train local youth to master the technique and managed to sell their products outside Egypt, she says.

Beyond traditional handicrafts and Ramadan items, the government could also help to protect other local craft industries from foreign competition, she adds.

“Some of the best local furniture comes from Damietta, but many similar items are also imported,” she says. “There should be bans on all of these.”

For his part, Shaker stresses that the trade ministry supports local craft businesses with more than just the April ban on imports.

“We are working with 39 small and medium industries in 17 governorates across Egypt to help them develop their business and up their standards to revive the local industries,” he says.

As Ramadan approaches, Hashim says he wishes to one day see all shops only selling local tinted glass lanterns like his, although this is unlikely to be soon.

“We have been wishing for a decree like this for years, and it’s about time we use our dollar reserves to buy only the essential items that we cannot produce, and instead depend heavily on local businesses,” he says.